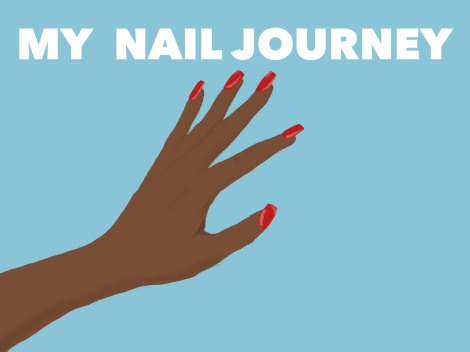 Lately, my nails have become the center of attention, judging by the overwhelming amount of compliments they’ve been receiving. Over the past months, I’ve been able to grow them and keep the length pretty consistent.

Oddly enough, my nail process began when I put on my very first set of acrylics. It’s ironic that a person like me has only done a full set of acrylics once in my life, seeing that I carry myself my with a prima donna-like persona.

WHERE IT ALL BEGAN

Remember in third grade when everyone used to chew on their nails? Yeah, I knew better than to participate in this crime. I’ve always told myself that being nail-biter was unacceptable and it would never appear on my resume.

Maybe I didn’t use those exact words as a third-grader but I knew from the jump it was not my portion.

During my teenage years, my obsession with nail polish began. My nails were always painted.

My mom even purchased me those mini nail polishes with the thin brushes so I could start doing amateur designs. No really, my designs were so amateur.

I loved the craft of nail art. I remember I would always watch cutepolish on YouTube, hoping my artistry would improve with every video. Being a dutiful subscriber, I almost never missed a video.

I’ve always wanted to recreate her designs, amazed at the virtuosity in her nail art because they were so amazing to me.

Eventually, later in high school, I settled down into just painting my nails with bright colours sans designs. And, yes, I had no respect for the seasons. It could be a chilly December day with snow flurrying about and I would paint my nails bright neon orange.

I think part of it was so that people could notice my nails.

I’ll be the first one to admit I love compliments.

In terms of length, my nails were always able to grow a pretty normal length. They were a little bit past short but not to the point where I could say they were long.

The average nail length is about 3mm and my nails would grow out to about double that.

I frequently changed the colour because I get bored easily. However, every time I do a colour-change, I gave myself a manicure. It became natural to me.

My nails would never be the same colour for more than four days. If you ever saw me with chipped nails or no nail polish at all it was because my life was in shambles.

When I got a new job, I decided that I wanted to alter some things about me to recalibrate my preferences and went ahead and had my first full set of acrylics done.

I have always been anti-acrylics. I had this idea that acrylics are for nail biters and people who can’t grow their nails well.

Also, they allegedly ruin your nails and that discouraged me from getting them.

They do. They make them thin. Allegedly.

I always wanted to save the first time I did an acrylic set for my wedding day because I know I’ll be too busy to change the colours and I want them long.

One day, I threw away those old dreams and decided to do my first set. I loved my nails. Pointing at things was the fun part.

After having my acrylics in for almost three weeks I went to the salon to take them off.

I was too late for a refill and I planned on putting in a new set. My nail girl informed me that my nails grew pretty long under my acrylics. I wouldn’t need a new set.

And they did. She gave me a shellac set with a hint of sparkle on my ring fingers and they almost looked like acrylics. My nails were all the same length. They were long and strong. 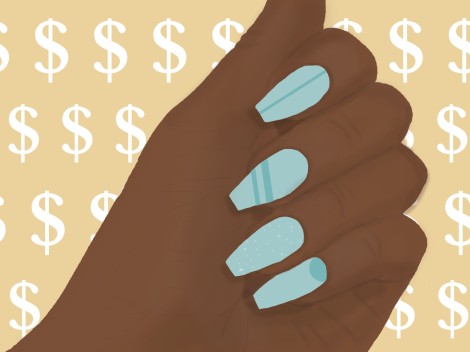 After this, I’ve been doing my nails consistently.

No, it has not been cheap. I even wonder myself how I’m able to afford this lifestyle. But Prescylla always finds a way.

My nails have always been a priority anyways so it’s not really that different from my previous lifestyle.

People always ask me how I keep them so long? Here’s how.

There is one downfall to my nail success story; nails do break. Yes, I have broken a nail or two, but there is a way to fix this.

If my nail fully breaks off I replace that ONE nail with an acrylic. I can grow my nails with acrylics so it works for me.

I feel that cutting off all my nails and restarting my growth process is unnecessary. So, I just replace it with an acrylic and within two weeks it’s as long as the rest.

My nail story probably won’t match yours. We all have different nails. I can only give you advice on what worked for me. Not to put you down but it may not work for you. Or it will and you can forget what you just read.

I know one thing that will work; building a relationship with your nails. Make sure you love them and take care of them.

Nail kits are not that expensive and can last you a long time. They’re what I used to use before.

Love your nails and then they will make you proud.

Just like most things in life, when you put in the work, the rewards will show up.

I want to end of this post from a quote from one of the baddest black girl magic girls out there, Zendaya Coleman.

“One of my biggest pet peeves in life is chipped nail polish. It’s either all on or all off. So you’ll never catch me slippin’. Boom!”